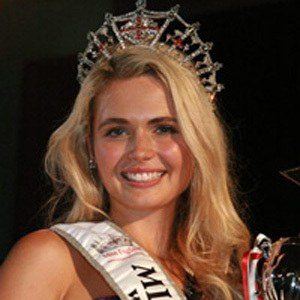 Model best known for winning the title of Miss England in the 2008 Miss England beauty pageant. She was signed to Nevs Model Agency and has gained a substantial social media following.

She earned her first pageant titled in 2005 as Miss Leicester while studying at De Montfort University.

She has worked as a radio presenter for 103 The Eye in Melton Mowbray.

She was born in Melton Mowbray. Her grandmother Irene earned the titled of Miss Army Pin-Up and Miss Lovely Legs in the 1940s. Her mother Dena won fifteen titles throughout her twenties. She got engaged to The Vamps manager Joe O'Neill in January 2018 and they wed in March 2019.

She is friends with fellow model Anastasia Smith.

Laura Coleman Is A Member Of