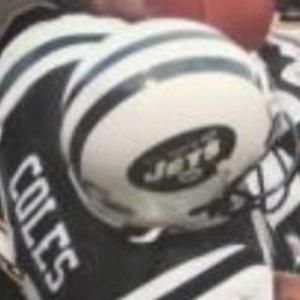 Wide receiver who played 11 seasons in the NFL, most notably with the New York Jets. He was a Pro Bowl selection in 2003 and received the Curtis Martin Award as the Jets' Most Valuable Player in 2006.

He was a member of a state champion basketball team at Ribault High School in Jacksonville, Florida. He attended Florida State University but was dismissed from the team following a petty theft incident.

The first touchdown catch of his NFL career came against the Miami Dolphins in a huge comeback victory which came to be known as the "Monday Night Miracle."

He has a son named Trilion. He was previously engaged to Kenda Fairchild.

He caught passes from quarterback Chad Pennington during his years with the Jets.

Laveranues Coles Is A Member Of