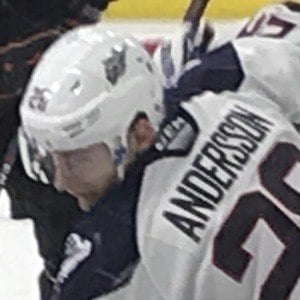 Swedish professional ice hockey player who is known for his work as a forward with the Hartford Wolf Pack in the American Hockey League. He is also known for playing as a prospect for the New York Rangers in the NHL.

He began his career in the Swedish Hockey League which he debuted in during the 2015-2016 season. He joined with Frolunda HC in May of 2017 and was called up to the NHL in March of 2018.

He was awarded the Le Mat Trophy for his work with HV71 during their 2017 season. He also helped win the gold medal for Sweden's national team during the 2018 World Championships in Denmark.

Both his father Niklas and his uncle Mikael are also professional ice hockey players.

Other players on the New York Rangers' 2018 lineup include Matt Beleskey and Pavel Buchnevich.

Lias Andersson Is A Member Of