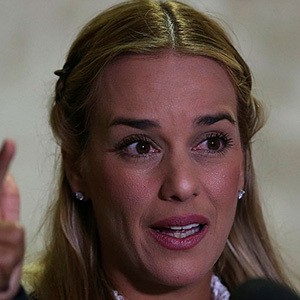 Activist most famous for marrying imprisoned Venezuelan politician Leopoldo Lopez. She is known for her criticisms of Venezuelan President Nicolás Maduro and has led several groups in opposition to him.

She graduated from Andrés Bello Catholic University in Caracas, Venezuela.

She was a cast member on the reality show Robinson: La Gran Aventura in 2001.

She has children named Manuela and Leopoldo with Leopoldo Lopez.

She received public support from French President Emmanuel Macron after she was barred from leaving Venezuela by the CICPC.

Lilian Tintori Is A Member Of