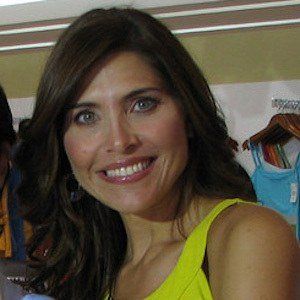 Award-winning television actress who has built her career leading dramas like La mujer de mi vida, Passions of the Heart, and numerous other shows. She has also appeared in feature films like Baño de Damas and A Ton of Luck.

In 1985, she moved to Italy to pursue a modeling career but would later return to Argentina to study acting. She made her acting debut in the 1993 Mexican telenovela Prisionera de amor.

She has won Palmas de Oro Awards for her roles in Prisionera de amor, Escándalo, and Scandal.

Her parents' names are Adela Gelfenben and Enrique Meritano. She previously had a relationship with producer Juan Maldonado. In 2013, she married Ernesto Calzadilla.

Lorena Meritano Is A Member Of