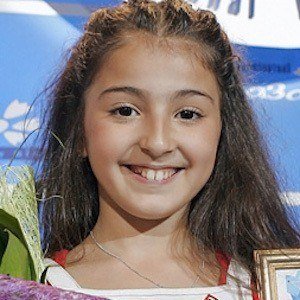 Singer-songwriter and dancer whose single "Barcelona" finished tied for second place at the Junior Eurovision Song Contest 2009 as a representative of Armenia. In 2013, she released singles called "Fire in Me" and "Story."

She was four years old when she started singing and would later begin training at the children's music studio Vesnushki where she became the lead soloist.

She was the overall champion of the Slavianski Bazaar in Vitebsk Children's Contest in 2008, winning the Grand Prix award.

Born in Astrakhan, Russia, she was raised in Kapan, Armenia before moving to Los Angeles, California with her parents in 2011.

She and Laura Omloop were both finalists of the 2009 Junior Eurovision Song Contest.

Luara Hayrapetyan Is A Member Of