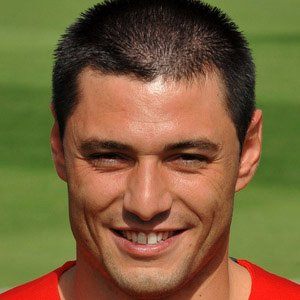 Italian goalkeeper who joined AC Milan in 2010 after spending a season with both Genoa and Palermo. He was a member of the Italian national team from 2005 to 2009, appearing in only 9 matches and mostly serving as a backup to the great Gianluigi Buffon.

He began his youth career with Roma Football Club at the age of nine.

He was a member of Italy's 2006 World Cup Championship team.

His first child, Giulio Cesare, with his wife Carlotta Bosello, was born on September 28, 2009.

He was coached by Marcello Lippi on the Italian national team in 2008.

Marco Amelia Is A Member Of