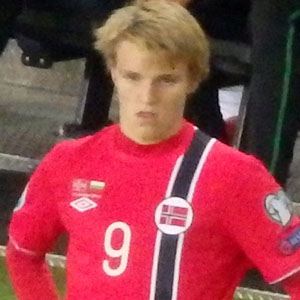 Norwegian soccer player who has impressed fans with his knowledge and technical ability despite debuting as a professional at a very young age. He made his senior debut for Stromsgodset IF and the Norwegian national team in 2014. He then became the youngest member of Real Madrid in the club's history when he joined the team at age 16 in 2015.

He was born in Drammen, Norway and worked his way up through the Stromsgodset junior ranks.

At 15 years and 253 days old, he became the youngest player ever to play for the senior Norwegian national team.

He became teammates with Harmeet Singh on the Norwegian national team in 2014.

Martin Odegaard Is A Member Of