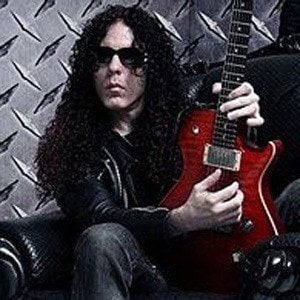 Self-taught musician who was the lead and rhythm guitarist for the heavy metal band Megadeth for nearly ten years.

His first audition for Megadeth left frontman Dave Mustaine cold, mainly because he didn't like the guitarist's multicolored hair.

He moved to Shinjuku, Tokyo in Japan in 2003, becoming a fixture on Japanese television with such programs as Rock Fujiyama and Jukebox English.

He married a Japanese cellist in 2012.

He guest-starred on the Japanese TV drama, The Quiz Show, featuring Sho Sakurai.

Marty Friedman Is A Member Of