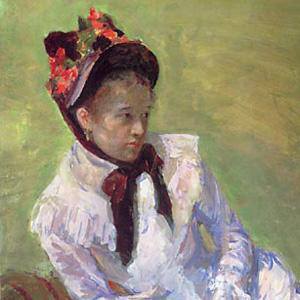 She traveled widely in Europe as a child and lived in France during the early years of her adulthood. She enrolled in a painting class taught by the famed Charles Joseph Chaplin in 1866. Her first painting to be chosen by the Paris Salon was "A Mandoline Player" in 1868.

She was most prolific during the 1890s and started mentoring such up-and-coming American artists as Lucy A. Bacon; she painted "Modern Woman" for the Women's Building at the 1893 World's Columbian Exposition.

She was born into an upper-middle-class family in Pennsylvania and studied at the Pennsylvania Academy of the Fine Arts. Her works dealt primarily with the mother-child relationship; interestingly, she never married or had children.

She was a friend of painter Edgar Degas.

Mary Cassatt Is A Member Of