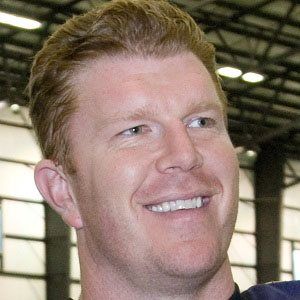 Center who is widely considered one of the best in NFL history. He made six Pro Bowls with the Minnesota Vikings before singing with the Baltimore Ravens, where he won Super Bowl XLVII in 2013.

He lettered in football, basketball and track at Cretin-Derham Hall High School in St. Paul, Minnesota. He graduated from Harvard University with a degree in Economics in 1998.

He received the Minnesota Vikings Man of the Year Award six consecutive years from 2002 to 2007.

He married a woman named Adriana and has children named Grant, Cole, Madison, Sydney and Ava.

He and Michael Oher were both offensive lineman on the Super Bowl XLVII-winning Baltimore Ravens teams.

Matt Birk Is A Member Of