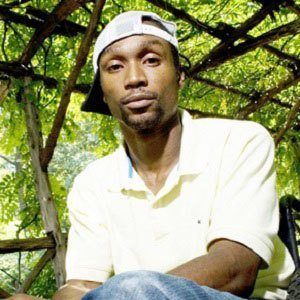 Underground hip-hop pioneer who founded the 90's rap crew Monsta Island Czars, released his own solo albums and worked with acclaimed MC's like MF Doom and Count Bass D. He has been confined to a wheelchair since surviving an attempted murder in which he was shot seven times in 1994.

He grew up living next door to actor Morgan Freeman, who got him a job as an actor on Sesame Street at age five.

He won Glyph Awards for Best Cover and Story of the Year for his autobiographical graphic novel Sentences: The Life of MF Grimm.

His birth name is Percy Carey. His half-brother Jansen Smalls was killed in the same attack which left Grimm paralyzed.

He was a ghostwriter for Dr Dre on the Compton rapper and producer's 1992 classic The Chronic.

MF Grimm Is A Member Of