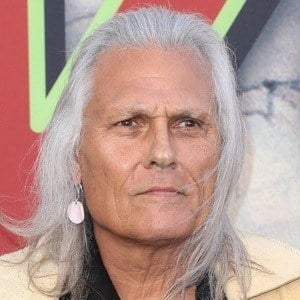 Known for his appearances in episodes of Twin Peaks, Roswell, and The X-Files, this Native American screen actor also worked as a ledger artist and jeweler.

He made his screen debut in an early 1980s movie titled The Legend of the Lone Ranger.

He appeared in an episode of the Fox comedy program Sons of Tucson.

Born Michael Heinrich, he grew up on the Yaqui reservation in Arizona in a family of Zuni, Apache, Hispanic, and Northern European, as well as Yaqui, descent.

Michael Horse Is A Member Of