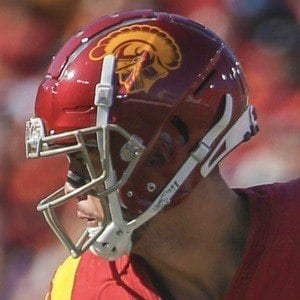 Wide receiver who was a second-round pick of the Indianapolis Colts in the 2020 NFL Draft.

He graduated from Oaks Christian School in 2016 and went on to play college football at the University of Southern California.

He and his wife Kianna post vlog and Q&A content to their joint YouTube channel, Michael and Kianna. They have accumulated over 290,000 subscribers on the video platform.

His father is former NFL player Michael Pittman and his younger brother, Mycah, has played college football for the University of Oregon Ducks. His mother's name is Kristin. He and Kianna are expecting their first baby girl in Fall 2021.

He became teammates with fellow wide receiver T.Y. Hilton on the Colts.

Michael Pittman Jr. Is A Member Of