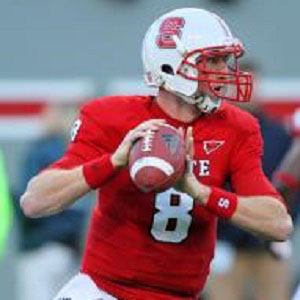 Quarterback who made his NFL debut in 2013 for the Tampa Bay Buccaneers, earning the team's starting job in week 4 of his rookie season. In 2017, he joined the Chicago Bears.

He played college football at North Carolina State University, where he threw for more than 4,000 yards as a senior, which led to him being selected in the 3rd round of the 2013 NFL Draft.

As a rookie he threw for more than 2,600 yards, despite playing just 13 games, and was the named NFL's Rookie of the Week in week 12.

His brother, Sean Glennon, played for his college rival, Virginia Tech. In 2015, he married Jessica Wetherill.

For his first two years at North Carolina State, he was a backup to Russell Wilson.

Mike Glennon Is A Member Of