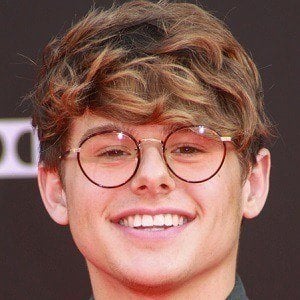 YouTube star and proclaimed "average internet vlogger" known for his self-titled channel, which has accumulated over 1.7 million subscribers. He was previously known as MikeIsAverage.

He created his MikeIsAverage YouTube channel in March of 2013 and one of his very first videos was titled "What I Do When I Am Home Alone!"

He began talking before the age of 1. He spent several years learning Karate. His Vine channel earned over 50,000 followers.

He is from New Jersey and he has a younger sister named Sydney. His parents are named Michael and Monica. He previously dated Instagram star Griffin Arnlund. He began dating Olivia Rouyre in January 2019.

He played Would You Rather in a video with Magcon Boys Hayes Grier, Aaron Carpenter, Carter Reynolds, and Matt Espinosa.

Mikey Murphy Is A Member Of