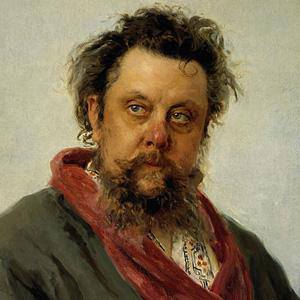 Innovative Romantic composer known for "Night on Bald Mountain" and "Pictures at an Exhibition." He was one of The Five.

He began to heavily drink while at military school after the school's director General Sutgof encouraged such habits in his students. He would eventually struggle with severe alcoholism.

His "Night on Bald Mountain," while well-known, is rarely performed in its original form.

He was born into the thirtieth generation following Rurik the Great, the first King of ancient Kiev Rus; his family was comprised of wealthy landowners and as a result, belonged to the Russian Landed Gentry.

His musical abilities were so advanced that he was able to play a John Field concerto and works by Franz Liszt for family and friends when he was six.

Modest Mussorgsky Is A Member Of