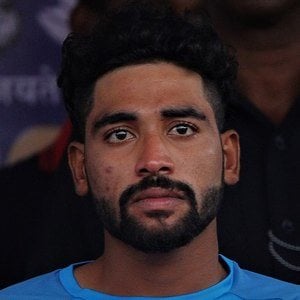 Indian pace bowler known for his first-class play with Hyderabad, taking 41 wickets while playing with the team during the 2016-2017 Ranji Trophy. He made his international debut in T20 against New Zealand in 2017.

He has been featured in several press outlets for his play, including ESPN and the Deccan Chronicle. He played with Sunrisers Hyderabad during the 2017 Indian Premier League season.

He was born and raised in Hyderabad, Telangana, India. He is the son of an autorickshaw driver.

His first international wicket was that of New Zealand captain Kane Williamson.

Mohammed Siraj Is A Member Of