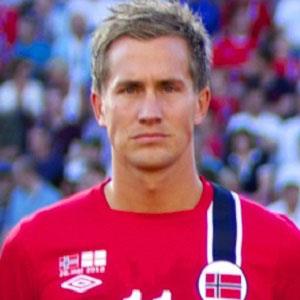 Winger from Norway who became a rising star after scoring seven goals with the Norwegian Premiere League team Toslo during the first half of the 2004 season. He was previously the top goal-scorer in the Norwegian First Division league in 2002.

He was born in Oslo and played youth soccer for Norild and Polarstjernen beore signing with Tromso in 2000.

He has been the frontman of the all-soccer player band The Players, whose single "This Is For Real" was released in support of the Soccer Against Crime campaign.

He was signed to the Blackburn Rovers by manager Graham Souness midway through the 2004-05 season.

Morten Gamst Pedersen Is A Member Of