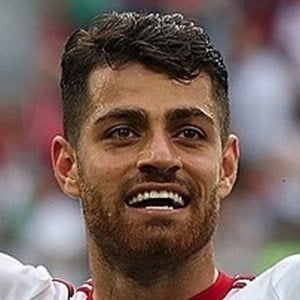 Iranian professional football player who is known for his work as a Centre back on both the Al-Arabi and Eupen club teams. He is also recognized for playing as number 88 on the Iran national team.

He started his youth career in 2005, originally playing for the Paykan Babol club. He later went on to play for Pas Tehran and Persepolis before making his senior career debut in 2010 as part of the Naft Tehran club.

He is known for having won the Qatar Crown Prince Cup, the Qatar Emir Cup, and the Sheikh Jassim Cup all in 2017 as part of the Al-Sadd club.

He was born and raised in the Pain Ganj Afruz village in Babol County in Iran. He shared a photo with both his brother and mother to his Instagram in in July of 2019.

He played alongside fellow professional player Xavi as part of the Al Sadd club within the Qatar Stars League.

Morteza Pouraliganji Is A Member Of