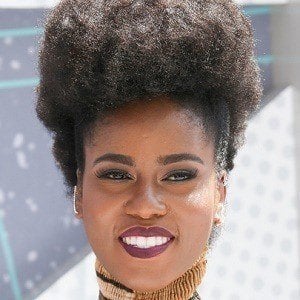 Ghanian afropop singer who made her debut in 2014 with the single "Borkor Borkor." The award-winning singer released her debut album Re-Vee-Lation and followed up with the critically acclaimed sequel Verified in 2015.

She made her musical debut in the summer of 2012 as a member of the Lynx Entertainment girl group D3. The group released a number of popular singles before dissolved in 2013 due to educational commitments.

She has been nominated for several Ghana Music Awards and won the title of Unsung Artiste of the Year in 2014 and Best New Artiste Of The Year in 2015.

Her real name is Vera Hamenoo-Kpeda. Her father, Ernest, was a businessman, and her mother, Florence, a caterer. She has two older sisters and one brother. Her sister, Marrgee, is a popular YouTuber and makeup artist.

Her debut album featured appearances by a collection of popular artists including Shatta Wale and Stonebwoy.

MzVee Is A Member Of