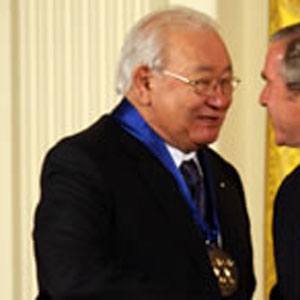 A key figure in the Native American Renaissance, he is best known for his novel, House Made of Dawn, which received the Pulitzer Prize for Fiction in 1969. His other literary works include The Way to Rainy Mountain (1969) and The Gourd Dancer (1976).

He earned a Ph.D. from Stanford University in the early 1960s. He published his first work, The Journey of Tai-me, in 1967.

He was one of the subjects of the 1996 Ken Burns documentary, The West.

The son of Natachee Scott Momaday (a writer) and Al Momaday (an artist), he held membership in the Kiowa Tribe of Oklahoma. In 1959, he married Gaye Mangold.

He received the Medal of Arts from George W. Bush.

N Scott Momaday Is A Member Of