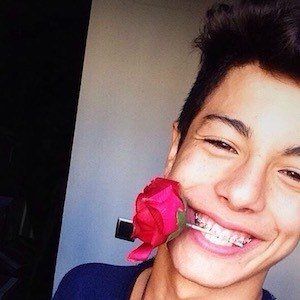 Social media sensation with strong followings on the networks of TikTok, Instagram and YouTube. His combination of dance and lip-sync videos on the former of the platforms has earned him 14 million fans, as well as the verification crown. Also an aspiring singer, he's released original songs like "Escápate," "Volver a Empezar" and "Te Invito a Volar."

He started to develop his social media following in early 2016.

He posts a variety of vlogs as well as reaction videos to his self-titled YouTube channel, which has over 2.4 million subscribers. He is also popular on Instagram with over 4.2 million followers on his naimdarrechi account. In 2019, he published a book titled Muy Personal. In 2020, he won a Nickelodeon's Kids' Choice Award for Favorite Spanish Artist.

He was born and raised in Palma, Mallorca. His middle name is Alejandro. His parents' names are Maximiliano and Paola, and they are from Argentina. He has a younger brother named Thiago. He dated fellow TikTok sensations Àngela Mármol and Aida Martorell.

Naim Darrechi Is A Member Of