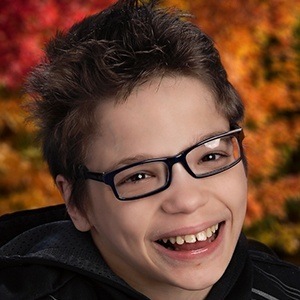 Oldest son of Asa and Katherine Killen, and one of the stars of their popular YouTube family vlog The Killen Clan. He appears in their daily videos alongside his five brothers and sisters. He and his family have racked up over 15 million views on YouTube.

He lived in Ukraine until 2013 when he was adopted by Katherine and Asa Killen. Aidan, his adopted brother, is also from Ukraine.

He has cerebral palsy and The Killen Clan's vlogs document the daily life of a family with special needs children. His brother Aidan is autistic and blind.

His parents are Asa and Katherine and his younger siblings are Aidan, Zoe, Jack, Piper, and Lierin.

He appears with his parents and siblings on their YouTube channel the Killen Clan. His sister, Zoe, also has her own channel, Zoe Aurora. AllAroundAudrey is another YouTube star whose family channel, That YouTub3 Family, contributes to her popularity.

Narkeez Killen Is A Member Of