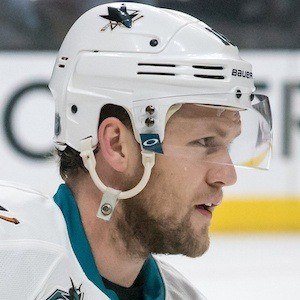 NHL center who was chosen in the second round of the 2007 NHL draft by the Nashville Predators. He's also played for Pittsburgh, Toronto, and San Jose.

He played for the Kitchener Rangers of the Ontario Hockey League before being drafted. He recorded his first career point, an assist, during his NHL debut in 2009.

He's been involved in two major trades during his career, one for James Neal and the other for Phil Kessel, although he wasn't the central piece in either of them.

He grew up in Palmerston, Canada.

He and Patric Hornqvist were both sent to the Penguins in exchange for James Neal in 2014.

Nick Spaling Is A Member Of