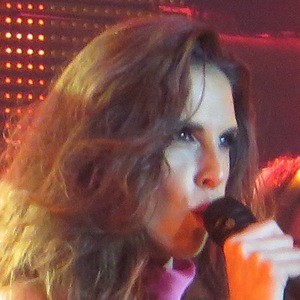 Spanish singer and actress best known for her hit single "Quiéreme" which was released in 2002. She is also known for her appearance in the 2007 television series Amar en Tiempos Revueltos where she played the recurring character Loli Marques.

She first earned recognition as a singer when she appeared on the competition series Operacion Triunfo in 2001. With success on the series, she released her debut album Brisa de Esperanza in 2002 which sold over 360,000 copies and was a 3x Platinum album.

She has appeared as a musical guest on a number of different television series such as Musica Uno and Tu cara no me Suena Todavia. She has also released several albums that have gone Gold including Anoranzas and Paketenteres.

She was born and raised in Nerja, Malaga, Spain. She married her manager Jose Manuel Maiz in 2010 and together they had a daughter named Martina in July of 2011.

She collaborated with producer DJ Sammy on her album and single "Tierra de Nadie".

Nuria Fergó Is A Member Of