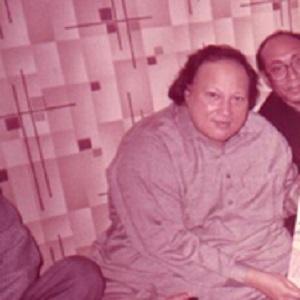 Pakistani singer who was considered one of the most prominent figures in the history of modern Qawwali music. He was best known to Western audiences for his work on the soundtracks for films like Dead Man Walking and The Last Temptation of Christ.

He began performing publicly at age sixteen and was signed by Oriental Star Agencies in the early 80's.

He was included on CNN's list of the twenty most important musicians of the past fifty years in 2010.

He married a woman named Naheed in 1979; they had a daughter named Nina.

He collaborated with Pearl Jam frontman Eddie Vedder on the soundtrack to the film Dead Man Walking.

Nusrat Fateh ali Khan Is A Member Of