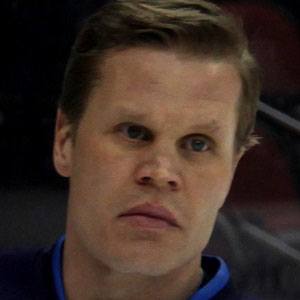 Finnish center who was one of the top offensive producers on the Florida Panthers in the early-to-mid 2000s. He won a silver medal with the Finnish national team at the 2006 Olympics, as well as bronze medals at the 2010 and 2014 games.

He was selected third overall in the 1997 NHL Draft by the Los Angeles Kings. He only briefly played professionally for the Kings before he was traded to the New York Islanders in 1999, then to the Panthers in 2000.

His best statistical season came in 2006-07 when he compiled career-highs in both goals (39) and assists (52) to make for an impressive 91-point season.

He married his childhood sweetheart Katerina in 2001 and the couple had three daughters together.

From 2010 to 2012, he was teammates with winger Jarome Iginla on the Calgary Flames.

Olli Jokinen Is A Member Of