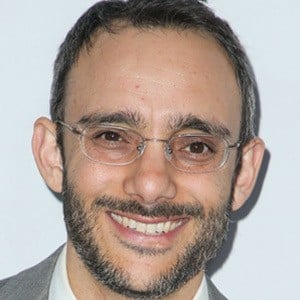 Iranian-American actor who portrayed Salim in Showtime's Sleeper Cell in addition to the character of Homes in The Hunger Games: Mockingjay - Part 2. He later landed parts in American Gods and the Disney+ series The Mandalorian. He also earned stable work as a video game voice actor.

After graduating from University High School in Irvine, California, he studied advertising and theater at Cal State Fullerton. He performed on stage before heading to television, appearing in Fraulein Else, Adoration of the Old Woman and Your Everyday Typical Romantic Comedy.

At the age of five, he moved to Paris. When he was 10, he and the family moved to Irvine, Orange County, California.

He was cast as Dr. Pershing in Jon Favreau's The Mandalorian.

Omid Abtahi Is A Member Of