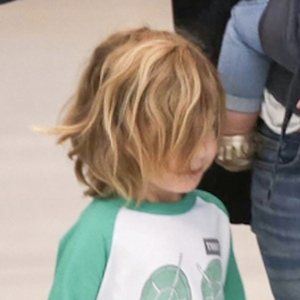 First child of actors Olivia Wilde and Jason Sudeikis. His parents began dating in late 2011 and announced their engagement in early 2013.

In October of 2013, his parents' representatives confirmed his impending birth. Wilde subsequently received numerous well-wishes from fans and thanked her Twitter followers in an October 27 tweet.

His father was once married to comedy writer Kay Cannon, and his mother's first marriage was to filmmaker Tao Ruspoli.

His father, Jason Sudeikis, rose to fame as a writer and comedian on Saturday Night Live. He later appeared in such films and television shows as We're the Millers and 30 Rock.

His mother, Olivia Wilde, became known for her roles in House and The O.C., as well as in such films as Drinking Buddies and Tron: Legacy.

Otis Alexander Sudeikis Is A Member Of