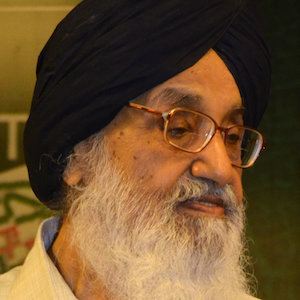 Indian political leader who served several terms as Chief Minister of Punjab between 1970 and 2014. In 2011 he was given the title Panth Rattan Fakhr-e-Qaum for his activities in the Sikh community.

He became active in politics in the late 1940s and was first elected to the Punjab Legislative Assembly (Punjab Vidhan Sabha) in 1957.

He was, at different points in his career, both the youngest and the oldest Chief Minister ever to serve in his Indian state.

He had two children-- Sukhbir Singh Badal and Preneet Kaur-- with his wife, Surinder Kaur.

He and Indian Prime Minister, Manmohan Singh, are both high-ranking politicians and practitioners of the Sikh faith.

Parkash Singh Badal Is A Member Of