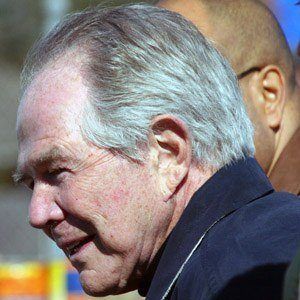 Christian business executive and media mogul. He was Chancellor of Regent University and Chairman of the Christian Broadcasting Network.

He ran in the 1988 Republican Party presidential primaries in pursuit of the nomination. He lost and endorsed party nominee George H.W. Bush at the National Convention.

He helped found several organizations and corporations, including the American Center for Law & Justice, the Christian Coalition, and the Operation Blessing International Relief and Development Corporation. He also hosted The 700 Club, the wildly successful Christian talk show.

He was born Marion Gordon. His brother gave him the name Pat. His father was U.S. Senator A. Willis Robertson. He fathered four children with wife Adelia Elmer.

He predicted that President Barack Obama would lose the 2012 election.

Pat Robertson Is A Member Of