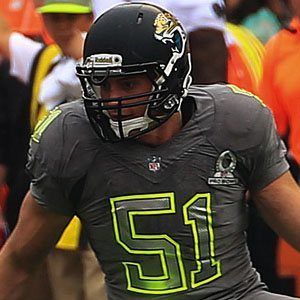 Former middle linebacker who made his first Pro Bowl while playing for the Jacksonville Jaguars following the 2013 season. He previously played for the Buffalo Bills from 2007 until 2010. While playing at Penn State, he was a two-time Consensus All-American.

He won the AAA State Championship with the Hopewell High School Vikings in 2002. He went on to play college football for Penn State.

He won the 2005 and 2006 Chuck Bednarik Award as the best defensive player in the nation, becoming just the second player ever to win the award twice.

He and star running back Marshawn Lynch were both taken by the Buffalo Bills in the 2007 NFL Draft.

Paul Posluszny Is A Member Of