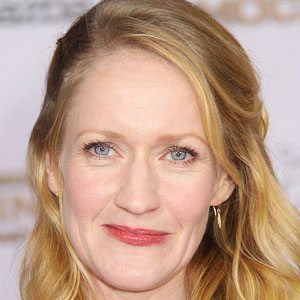 Veteran television actress who first gained acclaim for her role as Trixie on HBO's Deadwood before earning roles in the Battlestar Galactica spin-off series Caprica, the FX series Sons of Anarchy, and the Showtime series Ray Donovan.

Before landing her star-turning role in Deadwood, she made minor appearances in notable films such as Tombstone, Dunston Checks In, Trance, The Green Mile, the 2000 adaptation of Hamlet, and AI: Artificial Intelligence.

The list of shows she has been a guest-star in is endless, but it includes Star Trek: Enterprise, NYPD Blue, Six Feet Under, Lost, ER, John from Cincinnati, The Event, Fringe and more.

She was born in Belfast, Northern Ireland. She is sometimes credited as Paula Williams.

Hunger Games fans know her as Mrs. Everdeen, the mother of Jennifer Lawrence's character in the film franchise.