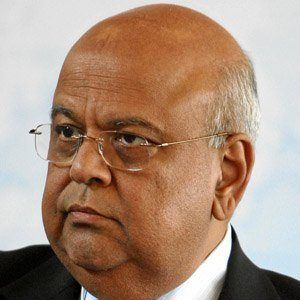 After serving from 2009 until 2014 as South African Minister of Finance, this high-ranking African National Congress (ANC) party member took office as his country's Minister of Cooperative Governance and Traditional Affairs. Earlier in his career, he had served as Commissioner of the South African Revenue Service.

After studying at the University of Durban-Westville, he served during the early 1990s as Chairman of the Convention for a Democratic South Africa.

He served in the South African Parliament from 1994 until 1998 and helped his country transition to the post-apartheid era.

He was born in the city of Durban, South Africa (in the KwaZulu-Natal province).

He was appointed to the position of Minister of Finance by South African President Jacob Zuma.

Pravin Gordhan Is A Member Of