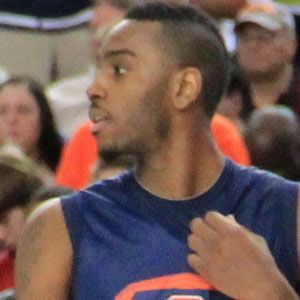 Power forward who was a First-Team All-ACC selection and the ACC's Most Improved Player in 2015. He was taken 36th overall in the 2015 NBA Draft by the Minnesota Timberwolves, then traded to the Cleveland Cavaliers.

He spent the early part of his life on the Virgin Islands before moving to Chicago at age 13. He played high school basketball at North Catholic High School and the Academy of the New Church.

He was the first player in the history of Syracuse men's basketball to complete his undergraduate degree in three years.

He lived with his grandmother Evelyn after the passing of his mother. He later moved in with his aunt Amira in Chicago. He began dating Jasmine Jordan, whom he proposed to in June 2018. They have a son.

His partner is the daughter of basketball legend Michael Jordan.

Rakeem Christmas Is A Member Of