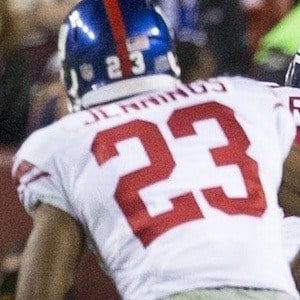 Running back who began his NFL career by playing four seasons with the Jacksonville Jaguars before signing with the Oakland Raiders, then the New York Giants. He retired at the end of the 2017 season.

He played high school football at Liberty Christian Academy in Lynchburg, Virginia. He spent one year at the University of Pittsburgh before transferring to Liberty, where he went on to average 5.7 yards per carry.

He set a Big South single-season record for rushing touchdowns, with 15, during his junior season at Liberty. He won the reality competition series Dancing with the Stars in 2017.

His parents are Albert and Deborah Jennings. He has siblings named Bryan and Butch.

He and wide receiver Tiquan Underwood were both drafted by the Jaguars in 2009.

Rashad Jennings Is A Member Of