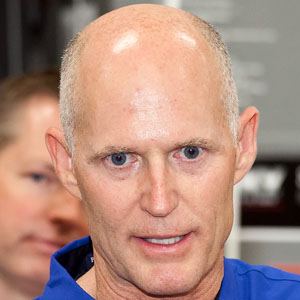 Republican politician who became the forty-fifth Governor of Florida in 2011 on a platform of fiscal discipline. He was formerly the Chief Executive of Columbia/HCA, a company which admitted to fourteen felonies involving their medicare billing practices and agreed to pay the federal government over $600 million.

He was a partner in the largest law firm in Dallas, Texas after graduating from the University of Missouri-Kansas City with a bachelor's degree in business administration.

He rejected federal funds for high speed rail in his state and also tried to require drug screening for all welfare recepients.

He and his wife Ann started a local community church in their hometown of Naples.

Through most of the 1990s he co-owned the Texas Rangers with George W Bush.

Rick Scott Is A Member Of