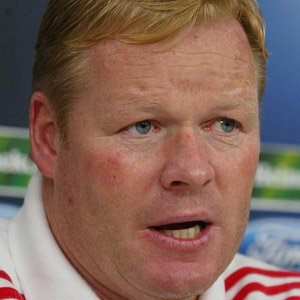 Dutch soccer player and manager who is widely considered one of the finest attacking central defenders ever to play the game. He won the La Liga title with Barcelona four consecutive years from 1991 to 1994 and scored the goal which won the club the European Cup title in 1992.

He was born in the city of Zaandam and made his professional debut with Groningen in 1980.

He set the La Liga for most consecutive penalty kick conversions with 25.

His older brother is fellow soccer manager Erwin Koeman and his father is former player Martin Koeman. He married Bartina Koeman in 1985 and has children named Debbie, Tim and Ronald.

He won the 1988 UEFA Euro with the help of Ruud Gullit.

Ronald Koeman Is A Member Of