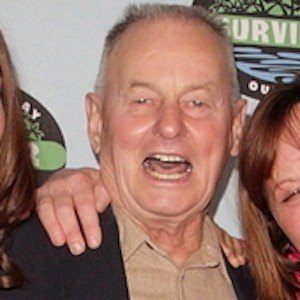 Former NAVY Seal who first rose to fame by competing on Survivor: Borneo before reprising his spot on the series' eighth season Survivor: All-Stars. He also hosted the reality competition series Combat Missions after his rise to Survivor fame.

He was seventeen when he enlisted in the United States Navy. During the Vietnam War he completed two combat deployments where he earned a Bronze star for heroic action.

In 2001, he published his co-written autobiography titled Book of Rudy: The Wit and Wisdom of Rudy Boesch.

After taking third in Survivor: Borneo, he shared his prize money with wife, Marge, and his three daughters. His parents, Clara, a housewife, and August, a butcher, were Austrian immigrants. His father fought for Germany in World War I.

In the first season of Survivor: Borneo, he competed against the show's first winner Richard Hatch.

Rudy Boesch Is A Member Of