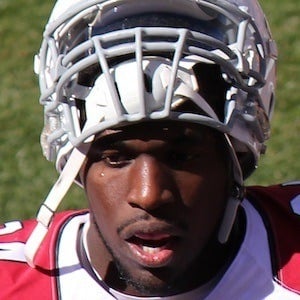 NFL linebacker who was a fourth round pick of the Arizona Cardinals in 2011, with whom he recorded seven sacks as a rookie. In 2015, he signed as a free agent with the Chicago Bears.

He attended the University of Texas, where he was the team's MVP as a senior. He also won the William V. Campbell and Wuerffel trophies for his academic and community service achievements.

He was a champion shot putter and discus thrower in high school. He has a master's degree from Arizona State University was named one of 2010's 20 Smartest Athletes by Sporting News.

He has a younger brother named Emmanuel, who also played at Texas and was sixth round pick in 2012.

He and Calais Campbell led the Cardinals in sacks in 2011.

Sam Acho Is A Member Of