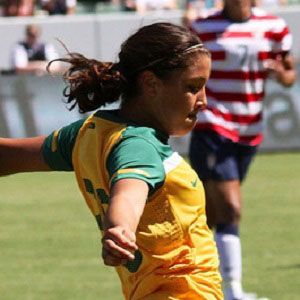 Australian forward who led the Australian women's national team, the Matildas, to its first-ever AFC Women's Asian Cup title in 2010. She picked up awards for Goal of the Year and Players' Player of the Year at the W-League Awards in 2009.

She was born in Fremantle, Australia and honed her skills at the Western Australian National Training Centre.

She and three of her Matildas teammates were profiled on ESPN's Aussies Abroad in 2013.

Her father and brother are Australian rules footballers Roger Kerr and Daniel Kerr. She has been dating fellow soccer player Kristie Mewis.

She has played alongside striker Kate Gill as a member of the Perth Glory Women in W-League.

Sam Kerr Is A Member Of