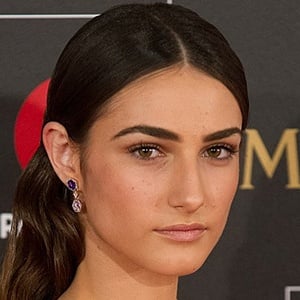 Spanish actress that made an international splash after being cast in the title role of the horror film Veronica which was distributed in the United States on Netflix.

She studied theater at la Escuela S.V. Producciones Escénicas between 2009 and 2012. From 2012 to 2014, she attended the Municipal School of Dramatic Art of Madrid.

Her role in Veronica earned her the Best Actress honor from the Cinepocalypse Festival. She was also nominated for a Goya Award and Feroz Award.

She was born in Madrid, Spain. She began dating fellow actor Miguel Herrán in 2019.

She would star in Veronica alongside Ana Torrent.

Sandra Escacena Is A Member Of