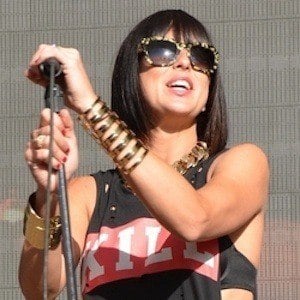 Singer who rose to fame as a member of Phantogram, an indie rock duo earlier known as Charlie Everywhere. Their single "Fall in Love" peaked at number three on the US alternative charts after it was released in 2014.

She and her bandmate Josh Carter have been friends since junior high and in 2007, they began working together on songwriting ideas. Before the band formed, she'd tried pursuing a visual arts degree but was unhappy with the discipline.

Phantogram has performed at major festivals around the United States and has supported acts like The xx, Muse, and The Glitch Mob.

She gained attention for her relationship with professional snowboarder Shaun White.

She and Phantogram have performed multiple times on Late Night with Jimmy Fallon.

Sarah Barthel Is A Member Of