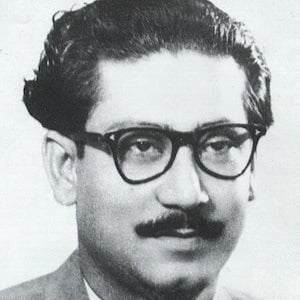 Independence leader and the first President of Bangladesh who served from 1971 to 1972 and then again in 1975. He was assassinated 7 months into his second term as President.

He joined the Awami League in 1949 after first becoming politically active when he joined the All India Muslim Students Federation in 1940.

The coup that killed him and several members of his family was planned by disgruntled Awami League colleagues and military officers but many believe the CIA instigated it.

He is the father of Bangladesh Prime Minister, Sheikh Hasina.

His daughter, Sheikh Hasina, followed in his footsteps to become the Prime Minister of Bangladesh.

Sheikh Mujibur Rahman Is A Member Of