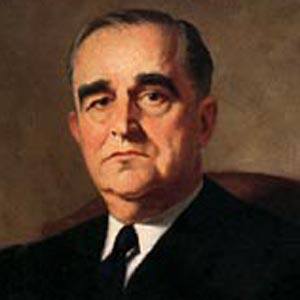 Senator from Indiana who became a Supreme Court Justice, where he frequently ruled to roll back government power.

He returned home to practice law and enter politics after serving in France during World War I, taking a Senate seat in 1935 and quickly befriending fellow senator Harry S. Truman.

He was a liberal senator, but became a conservative judge, possibly because he viewed President Roosevelt's New Deal program to be largely unconstitutional.

His formal education stopped at eighth grade, but he learned a lot about politics by accompanying his father to political rallies.

He and Earl Warren were two of the justices who ruled in Brown v. Board of Education that separate public schools for black and white students were not constitutional.

Sherman Minton Is A Member Of