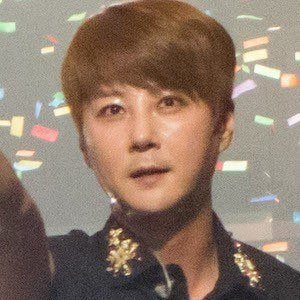 South Korean singer best known as a member of the multi-Platinum boy band Shinhwa. He released five albums as a solo artist before rejoining the band in 2012 for a series of comeback concerts and a new album, The Return.

He auditioned for Brothers Entertainment in the U.S., after which he became the first official member of Shinhwa.

He ruptured his cruciate ligament during a live performance of "Yo!" in March 2012, requiring surgery and six months of rehabilitation.

His birth name is Jung Pil-kyo.

He has been bandmates with Lee Min-woo in Shinhwa.

Shin Hye-sung Is A Member Of