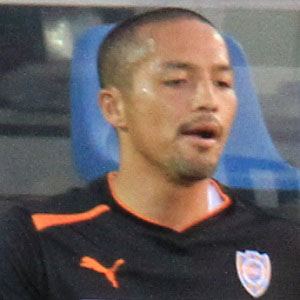 Japanese midfielder who became one of the brightest stars in Japanese soccer, being named the 2002 Asian Footballer of the Year and representing his home country at the Olympic Games and FIFA World Cup. He has won league titles with clubs like Feyenoord, the Urawa Red Diamonds and the Western Sydney Wanderers.

He was raised in the Shizuoka Prefecture. At age 18, he was the youngest Japanese player at the 1998 FIFA World Cup.

When he led Feyenoord to the UEFA Cup title in 2002, he became the first Japanese player ever to win a European league title.

He married a woman named Chieko, with whom he has children, in 2001.

He was teammates with Yuichi Komano at the 2004 Summer Olympics and 2006 FIFA World Cup.

Shinji Ono Is A Member Of