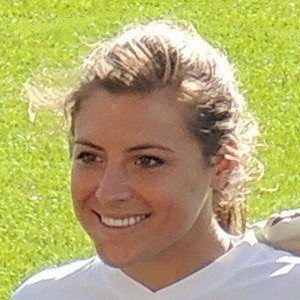 Mexican-American professional soccer player who is best known for playing the positions of both forward and midfielder.  She is known for playing as a part of the Mexico women's national football team as well as the Chicago Red Stars in the National Women's Soccer League in 2015.

She first started her athletic career in high school where she played soccer, basketball, and ran track. She continued her career for the Santa Clara Broncos of Santa Clara University from 2011 to 2014. Upon graduation, she was drafted to play for the Chicago Red Stars of the National Women's Soccer League in the college draft on January 16, 2015.

She was born and raised in Boise, Idaho and was raised by her father Mauricio Huerta who was an electrical engineer and her mother Jody Jensen Huerta.

As a member of the United states National Team, she can be seen in relation to other team members including Ashlyn Harris, Becky Sauerbrunn, Allie Long, and Mallory Pugh.

Sofia Huerta Is A Member Of