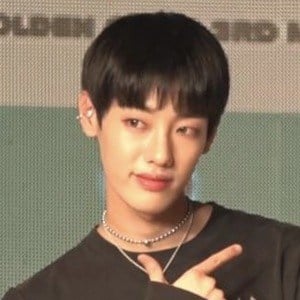 Singer who rose to fame as a vocalist and main rapper for the Woollim Entertainment K-pop boyband Golden Child.

After starting his first year of high school late because he was abroad in Japan, he joined several of his band members at Hanlim Multi Art High School. He was also a former Keyeast trainee.

Outside of performing, he is also known for writing his own raps.

His real name is Son Youngtaek. A native of Gyeongi-do, Hwaseong, South Korea, he is also fluent in Japanese.

During Woollim Entertainment's W Project, he and his Golden Child bandmate Jangjun released the single "Drought."

TAG Is A Member Of